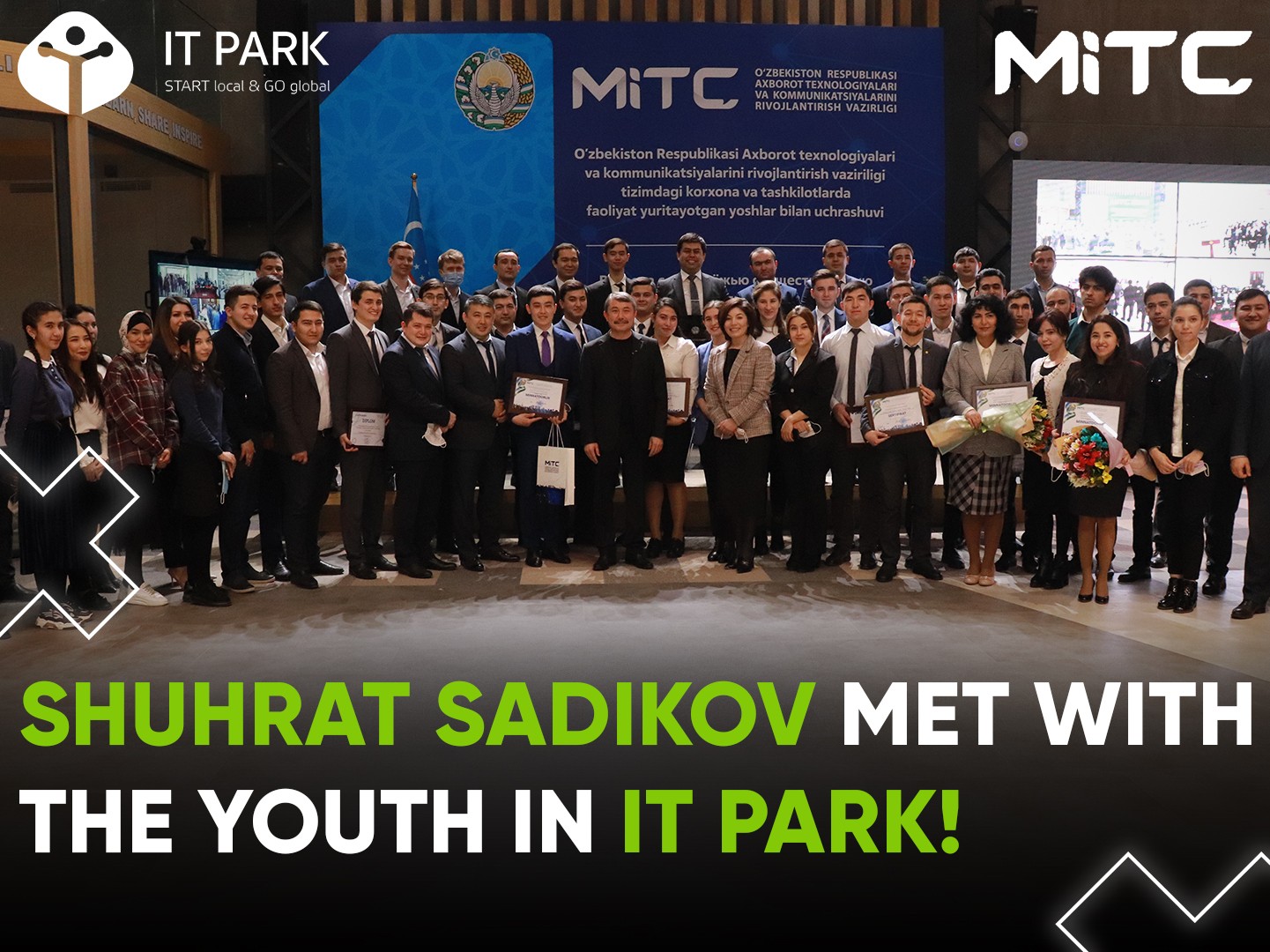 In his message to the Oliy Majlis and the people of Uzbekistan on 29 December 2020, the Head of our country declared this year as the Year of Youth Support and Health promotion.

In his speech at the Youth Forum on 25 December 2020, the President stressed that in terms of expanding and further strengthening our reforms, we consider our energetic, proactive, comprehensive developed youth with modern knowledge and skills as our standby.

The Forum presented important issues in a number of sectors, including information and communication technologies. In accordance with this, the Ministry has identified important tasks.

Based on this, on February 13, in the IT Park showroom was conducted an open meeting of the Minister for the Development of Information Technologies and Communications Shukhrat Sadikov with youth working in the ICT field, as well as students in industry educational institutions.

The First Deputy Minister for Development of IT and Communications Oleg Pekos, the Director of IT Park Farkhod Ibragimov, as well as other Deputy Ministers, representatives of IT Park branches and IT Centers in all regions of Uzbekistan attended the meeting.  Additionally, the heads of the following universities also attended the meeting: Inha University in Tashkent, Amity University in Tashkent, Tashkent State University of Information Technology. During the meeting, the Minister proposed several actual and important tasks in the sphere of communication technologies.


As new know-how appears in a rapidly changing world, the digitalization of society and other factors pose new challenges for the technology sector.  And a society that clearly understands these trends pays great attention to educating harmoniously developed young people, improving their skills in digital technologies.

Within the framework of the State Program in the Year of Supporting Youth and Strengthening the Health of the Population, a number of tasks planned for implementation have been identified.  In order to establish direct interaction between young people and responsible persons, an electronic platform "Yoshlar murojaati" will be created with the aim of increasing the interest of young people, their knowledge and skills in the ICT sphere in more than 100 cities and regions of the republic, educational centers of digital technologies.

At the same time, a branch of the Tashkent University of Information Technologies will be created in the Tashkent region, and technical schools for training personnel in the field of ICT will be opened in all regions. From 2021, a system will be introduced to reimburse up to 50% of the cost of obtaining international IT certificates for young citizens. In the following two years, within the framework of the project “One Million Uzbek Coders” 300 thousand young people on a free basis will have the opportunity to learn the basics of computer programming. Information systems «Online, Digital, Secure and Specialized School» and «Management of Processes in Higher Education» will be created and introduced into daily work. It is planned to open branches of IT Park in the Republic of Karakalpakstan, Bukhara, Khorezm and Namangan regions.

The megaproject "One Million Uzbek Coders" which was launched in November 2019 and aimed at broad distance education of young people and the population in relevant IT specialties with the help of a specialized online portal (uzbekcoders.uz), is being implemented by the Ministry for the Development of Information Technologies and communications and Dubai Future Foundation of the United Arab Emirates in collaboration with the Ministry of Investment and Foreign Trade and the Ministry of Public Education.


According to the decree of the President of the Republic of Uzbekistan “On measures to further improve the education system in the sphere of information technology, development and integration of scientific research with the IT industry” dated October 6, 2020, in 2020, 14 basic schools with in-depth study of computer science were created and staffed and information technology. In order to achieve these above-mentioned goals, sponsor organizations and enterprises were involved. They allocated funds over 10 billion soums.

In the 2020/2021 academic year, a new direction of the bachelor's degree – “Digital Economy” and 8 new directions for the magistracy, opened at TUIT.

“Dear youth, if you, looking directly to the global trend of digital transformation, using technology, try to implement your ideas and ambitions in the digital sphere. Thus, it is in your hands to make Uzbekistan’s future even brighter,” added Kokh Taek Jin.

In accordance with the decree of the Cabinet of Ministers, a joint Uzbek-Belarusian faculty was launched in the structure of TUIT. In 2019/2020 academic year, 505 students successfully completed the first year of the faculty while in 2020/2021 academic year, 500 students enrolled the joint faculty.

Nowadays, over 1500 students are pursuing their studies at TUIT and its branches.

The quota for admission to the Specialized School for in-depth study of subjects of the direction of information and communication technologies named after Muhammad al-Khwarizmi in 2020/2021 consisted of 330 people, and the entrance exams to the school were conducted online.

“The Ministry for the Development of Information Technologies and Communications of the Republic of Uzbekistan, together with IT Park, have begun to adopt and implement effective policy packages, including an increase in the number of software professionals in all corners of the country, wider use of the Internet throughout the country, development of the internal software market, promoting the development of English, business languages ​​through IT, increasing productivity in other sectors and learning IT to create new opportunities for entrepreneurs, ”said Indian Consultant, IT Park Advisor, the Director of IT Park in Jizzakh Mr. Jairam Partasarti.

Within the framework of the third initiative of five important initiatives proposed by the President of the Republic of Uzbekistan (Organization of effective use of computer technologies and the Internet by the population and youth), educational centers of digital technologies are being created throughout the republic. In 2020, 107 such training centers were launched across the country.

It was highlighted at the meeting that youth initiatives are very essential. Recommendations were made to create an effective system of youth work, both individually and systematically, and that ministry leaders should prioritize youth issues.

“A new Uzbekistan is being built, new integral and continuous systems of comprehensive support and assistance to young people are being created. The parameters of admission to universities are increasing. Over 500 companies have started operating at IT Park. In an international sphere, Uzbekistan is getting ever higher positions every year. Uzbekistan has an advantageous geographical position, it is located in the very heart of Central Asia, and successfully cooperates with many countries: Russia, China, Korea, Western European countries and the United States, tries to use the best practices of these states applicable to the realities of the country. Currently the implementation of the program "One million Uzbek Coders" is underway throughout the Republic, new IT schools and branches of IT Park are being created. The state spares resources and funds to organize such projects. Everyone understands that the future belongs to advanced information technologies, including artificial intelligence, robotics and big data processing,” said Igor Tsyrelchuk, advisor to the rector of the Tashkent University of Information Technologies named after Muhammad al-Khwarizmi.

During the meeting, the youth put forward proposals and expressed opinions on the further development of the ICT sphere. The Minister Sh. Sadikov gave specific instructions to the heads of the relevant subordinate enterprises on the critical remarks made, and also expressed his willingness to personally and thoroughly study individual proposals from talented students, and, if necessary, put them into practice.

As noted at this event, this dialogue once again demonstrated the importance of getting to know youth, their goals, and mobilizing them for broader business activities.