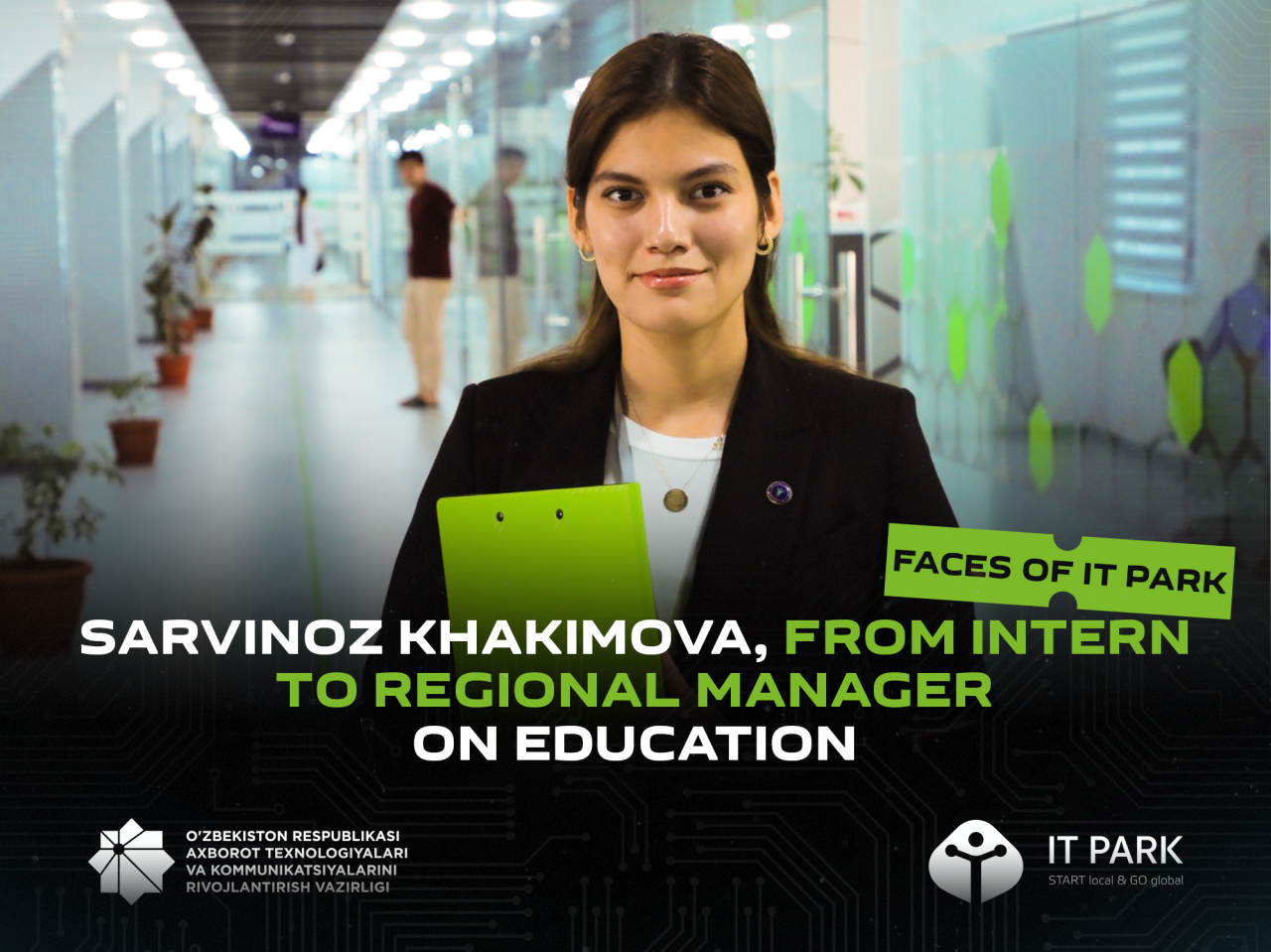 Faces of IT Park: Sarvinoz Khakimova, from intern to regional manager on education

We all want to know how the company work: not only how it functions, but also about those who make it work effectively. It Park launches a new column where we tell about its members, employees who, day after day, make a huge contribution to the development of the IT sector. We would like to introduce our first guest, the regional education manager at the Jizzakh branch of IT Park, Sarvinoz Khakimova.

Sarvinoz is 22 years old. She graduated from a medical college in Jizzakh, and now she is completing the 4th year of School Management major at the Faculty of Pedagogy and Psychology of the State Pedagogical University.

She has been working at IT Park Jizzakh since the very opening - October 2020. According to her, as soon as she learned that a branch of such an organization was opening in her hometown, she immediately wanted to get there.

“My first visit to IT Park Jizzakh was quite funny: I went there and said that I needed a job here. At first, everyone was surprised, but hired took me as an intern. For two months, I worked as an administrator, then as a manager of an IT center in Jizzakh. Six months later, I was appointed as Regional Education Manager.”

Now the Sarvinoz’s task is to create highly effective IT courses and implement them throughout the region. In addition, Sarvinoz, together with colleagues, creates conditions for young freelancers so that they can launch their own startups.

For two years now, Sarvinoz has been working tirelessly in the Jizzakh branch. The girl admits that she loves her work very much, but at the very beginning it was tough.

“Since it was a completely new area, at first we didn’t know which direction to go in, we didn’t know where there could be traps, surprises. We created our own individual path. One of such complex projects for us was "Future skills Uzbekistan". The idea was great: we had to train 100 people aged 18 to 35 from low-income families throughout the region. We were pleased with the results: we helped many graduates with employment.”

Sarvinoz is happy that IT Park is doing great things to improve the quality of life of the population, and she is glad to be a part of this progress. As the guest of the column admits, all the guys in the team are young, so they are on the same page and understand each other perfectly, and even if sometimes there are misunderstandings and disputes, they become an idea for new projects.

Now, IT Park has become a family for her.

“IT Park is a big, friendly multinational family. There are a lot of us, but each employee has his own role, just like in a family. When IT Park began to open branches and IT centers, I was glad that we could help young people all over the country. It is very cool that each of the employees strives to make the world a better place. We all have a common goal - to develop the industry, this makes us wake up every morning and move on to fulfill our mission. And of course, IT Park is a lifestyle without which I can no longer imagine myself.”

Seeing the eagerness of those who come here seeking new knowledge inspires her to work harder.

“It is a great pleasure to see the faces of young girls and boys who come to the courses and at first do not know what they want, and then, after a month or more, they come with their own ideas and ask for help. Moreover, they talk about their projects with such confidence, as if they have been in this field for 10 years and know for sure that their product will become successful. And I love watching them grow and develop. Their confidence and the success of these guys is the biggest motivation for me.”

What do you think about Uzbekistan’s IT sector?

Sarvinoz is confident that IT is the most actively developing area in Uzbekistan. She notes that if development continues at this pace, then Uzbekistan will become one of the leaders in the industry.

“I believe that Uzbekistan will take the ranks of the leading countries in the export of IT services. In recent years, the ICT industry in our country has received special attention. Every day, some event or competition in the field of IT. I, as a regional education manager, am convinced every time that the initiative to open IT centers in each district was the most effective way to create, so to speak, an “army of techies”. The number of competency of IT professionals is increasing, and this is the fastest and most reliable way to tap the global IT arena.”

She notes that the development of the sector is also possible due to IT Park’s efforts: firstly, thanks to effective courses, after which junior developers or designers can earn extra money on freelance or in local IT companies; secondly, through outsourcing.

“I am very glad that young people, in addition to IT, began to study foreign languages. As soon as the IT sector began to develop in Uzbekistan, people realized that they would not go far if they only worked with local companies. I see this as a huge plus, because this is a direct road to develop and improve the sector.”

Tell us about your hobbies and dreams

Sarvinoz loves to read. She spends all her free time on self-development and reading literature on world history.

“I am a member of the Future leaders club, and keen on world history, especially geopolitics. We, members of the Jizzakh Club, have created a project called "Geopolitical analysis". We meet every 2-3 weeks. During meetings, we study geopolitics in detail, discuss topics and even hold debates.”

In addition, Sarvinoz is interested in management, and specifically in the development and creation of the most effective for the use and control of socio-economic systems.

“Now my biggest dream and goal is to get admitted to the Academy of Public Administration. I want to contribute to the development of this area. And another dream is to get an MBA degree. And I believe that I will succeed!”

If you want to become part of the IT Park family, send your resume to the email address: hr@it-park.uz