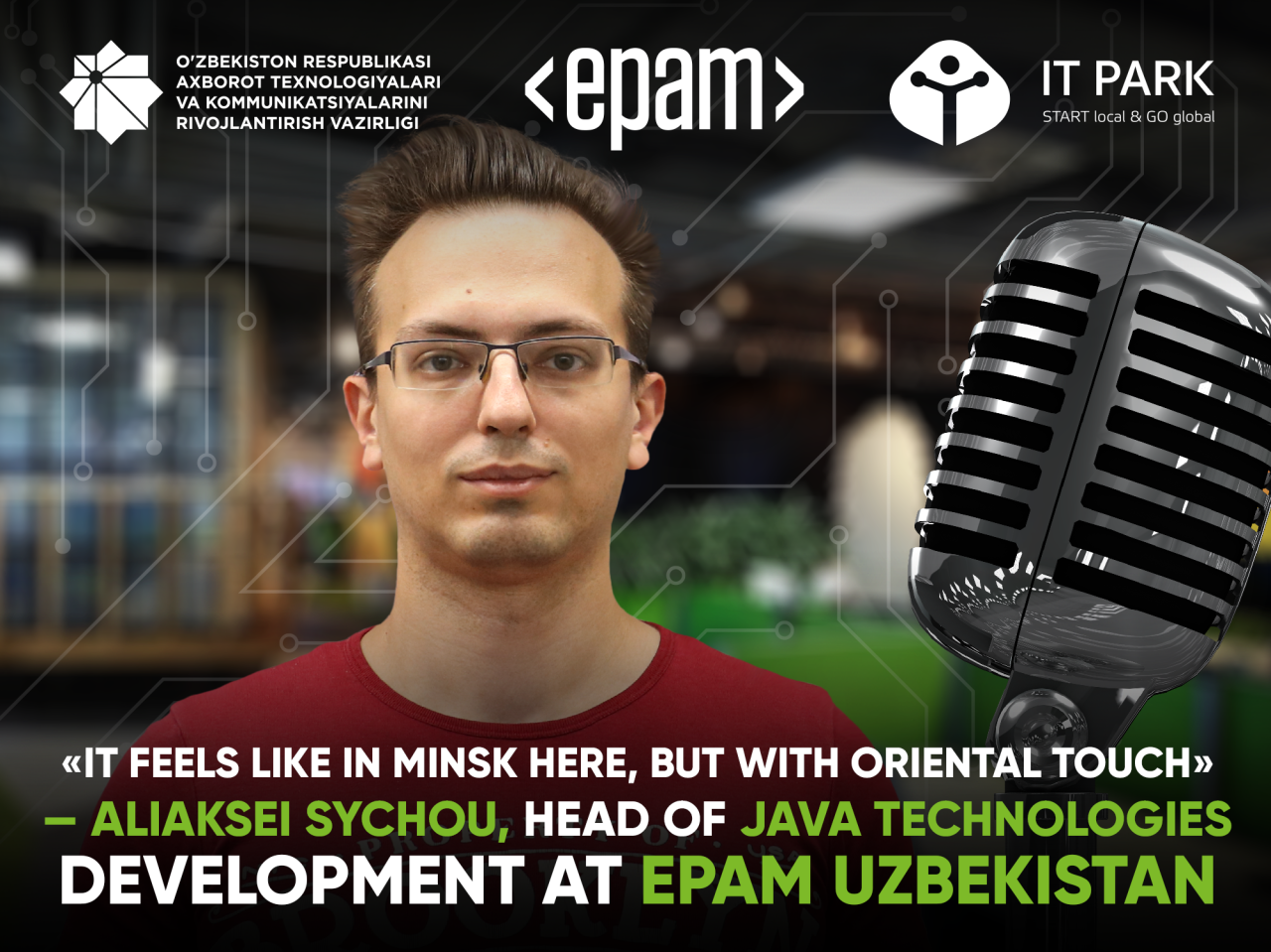 «It feels like in Minsk here, but with oriental touch» — Aliaksei Sychou, Head of Java Technologies development at EPAM Uzbekistan

IT Park continues to tell the stories of IT professionals who moved to live and work in Uzbekistan. This time we had a chance to speak to Aliaksei Sychou, 29 year-old Head of Java Technologies development at EPAM Uzbekistan. He has been working for EPAM for 7 years who build his career starting as a middle developer.

Aliaksei’s story about coming to Uzbekistan

In September of last year, Aliaksei was offered to help the management of EPAM Uzbekistan to line up a resource management structure and help with training and staffing.

‘I came to Tashkent in January. I decided to look around, learn more about the country first. It felt like home, the city pretty much resembles Minsk, but with with oriental touch. I stayed in Tashkent for three weeks and returned to Minsk with an intention of moving soon with my family’.

In Uzbekistan, Aliaksei is responsible for building a structure in the Java unit, hiring employees and helping them adapt to the workplace, advice on training and career prospects in the company, people, and cooperation with universities in Uzbekistan.

Aliaksei notes that he had not faced any issues regarding the paperwork upon arrival.

‘EPAM is a resident of IT Park, whose employees help those relocating with the preparation of the necessary documents and apartment search. Within a week of arriving, I moved into an apartment in the city center.’

Aliaksei’s opinion on IT sector of Uzbekistan

‘I noticed that the IT industry is quite popular here. I often see and hear news about the state measures to develop the sector, changes and reforms. At this pace, Uzbekistan will soon be able to reach a substantially new level’

Aliaksei also noted that the majority of local IT professionals are good at their jobs, know English very well, interested in technological innovations, attend educational and community events.

The country left a positive impression on Aliaksei.

‘Streets resemble ones back in my hometown. Everyone says that Minsk is a green city. There is more greenery in Tashkent. It’s pleasant to watch the view every time I look out of the window’.

Aliaksei really likes Uzbek people who he thinks are open-minded, friendly, easy to communicate, responsive, polite. He says he’s never seen someone soeaking rude towards anyone.  Aliaksei noticed special attitude towards children in Uzbekistan where everyone is drawn to the child, they want to shake their hand, play with them.

In addition to Tashkent, Aliaksei managed to visit Samarkand. Bukhara and Khiva are next in line.

‘Many of my friends and classmates from the university moved to Tashkent, we plan to explore the country together,” Aliaksei says. — Samarkand is amazing: Bibi Khanum, Registan, the mausoleum of Amir Temur, Ulugbek Observatory... The city is imbued with history and antiquity, it is impossible to describe with words, one can only observe and enjoy. No wonder it is called the pearl of the East’

Aliaksei described Uzbek cuisine as ‘insanely delicious’. At his own words, when after the first three-week stay in Tashkent, returned to Minsk, he immediately went to the Uzbek cafe in his hometown and ordered somsa. But ... it still tastes better in Tashkent.

‘It seems to me that in Uzbekistan, even if you try, you still cannot find bad food. I told my friends that if they come and try Uzbek cuisine, they would always remember the taste of amazing dishes of local cuisine».

Aliaksei notes and eastern bazaars as well. He likes how local vendors, address him as «aka» (meaning ‘brother’ in uzbek), call to try something, buy, and then you can bargain with them.

‘Local markets are clean. Fruits, dried fruits are so tasty that it is impossible to describe it with the words. We managed to try sumalak as well, the whole family loved it’

Aliaksei is looking for a kindergarten closer to home for his three-year-old son.

‘My son has already made friends with the local guys. He is very happy. It is warm here and there are many fruits that he loves so much. My wife also likes Tashkent. I’m waiting for summer, want to know what summer is like here,’ he admits.

Now Aliaksei is considering studying the Uzbek language. He managed to learn a couple of words in Uzbek, which he actively uses while communicating with his colleagues.

“I would like to learn basic expressions for communication. If there is such an opportunity, I will definitely do it. I will recommend Uzbekistan to all my friends. My mother is thinking about retiring and moving here permanently (laughs). This is a beautiful country that one should definitely visit,” he added.