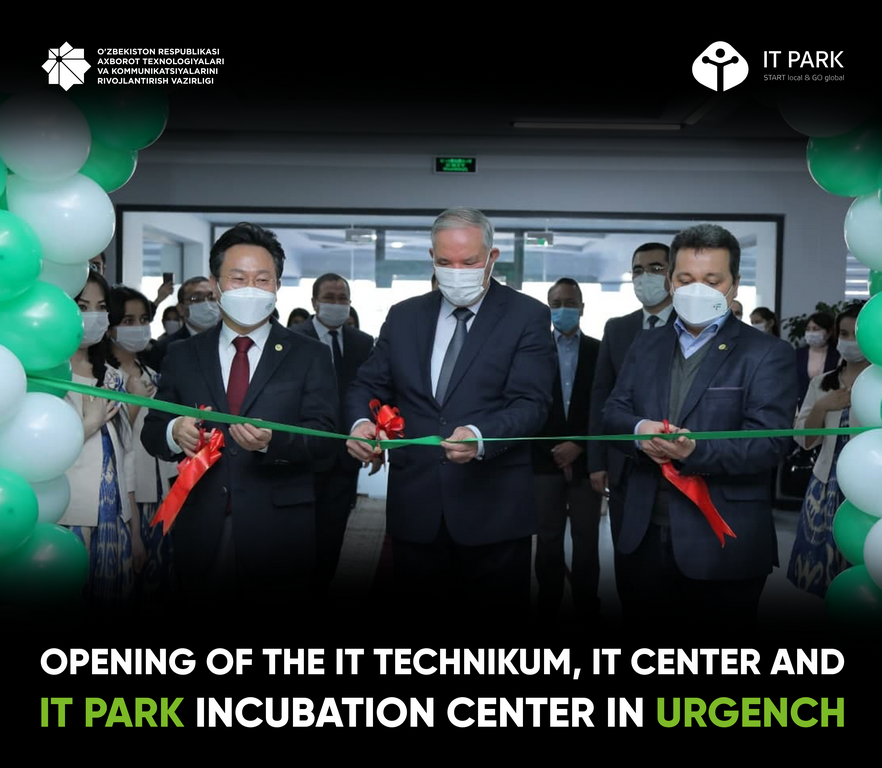 IT Technikum, IT Center and IT Park incubation center were opened in Urgench

On February 16, 2022, Minister for Development of Information Technologies and Communications of the Republic of Uzbekistan Sherzod Shermatov took part in the opening of an IT Center, an IT Technikum, and an incubation center in the city of Urgench, Khorezm region.

The event was also attended by a delegation from the Republic of Korea headed by Deputy Minister of Internal Affairs and Security of the Republic of Korea Ko Gyu Chang, Khokim of Khorezm region Farkhod Ermanov, IT Park Deputy Director for International Relations Bakhodir Ayupov, IT Park Deputy Director for Regional Development Abdulahad Kuchkarov and many others.

In the new IT Park incubation center, where all conditions are created for local youth to implement their start-up ideas and business projects, aspiring start-ups and owners of innovative ideas were able to present their projects and talk about their plans.

In the IT-Center of the city, which was opened with the support of the Republic of Korea, the guests were presented courses in robotics and other IT specialties, which are already open and available to everyone.

Also during the event, the results of the large-scale project “TechBika” to train women and girls in the Khorezm region in IT skills were summed up.  As a result, 1148 women and girls received free training, 500 of whom were able to find a job, and the rest expressed a desire to continue studying IT specialties.  The graduates of the project were awarded certificates and memorable gifts from the Korean Delegation and IT Park representatives.

It is worth noting that Sherzod Shermatov and Ko Gyu Chang were presented with the created conditions in the Urgench branch of IT Park for local IT companies: modern offices, a co-working center equipped with a high-speed Internet connection, and modern technology.

By the way, currently, 9 residents operate in the branch, including large IT companies such as EPAM Systems, as well as about 40 start-up projects are being developed as part of incubation and acceleration programs, 5 of which have already been able to receive funding.

Separately, it is worth noting that during the opening ceremony, an interview was held for admission to the BPO School, which will soon open in the Urgench branch of IT Park and will provide training in skills for working in the field of logistics with further employment.  Also, the opening of such a school will provide new jobs for the youth of the Khorezm region and increase the volume of exports of IT services in the region.  Such schools have already been opened in Jizzakh and Fergana regions and have already gathered their first groups for training.

Minister for Development of Information Technologies and Communications of the Republic of Uzbekistan Sherzod Shermatov noted the importance of creating comfortable conditions for the education of the country's youth, as well as carrying out such large projects as “TechBika” and opening the BPO School in order to popularize the field of information technology among the general population.

“It is very symbolic that one of the first IT-Centers with the support of Korean partners is being opened in the homeland of the great scientist Muhammad al-Khwarizmi, who laid the foundation for modern mathematics and information and communication technologies.  During his state visit to the Republic of Korea, the head of state instructed to raise the partnership between our countries to a new level.  And the opening of this center is the practical embodiment of these ideas,” – added Sherzod Shermatov.